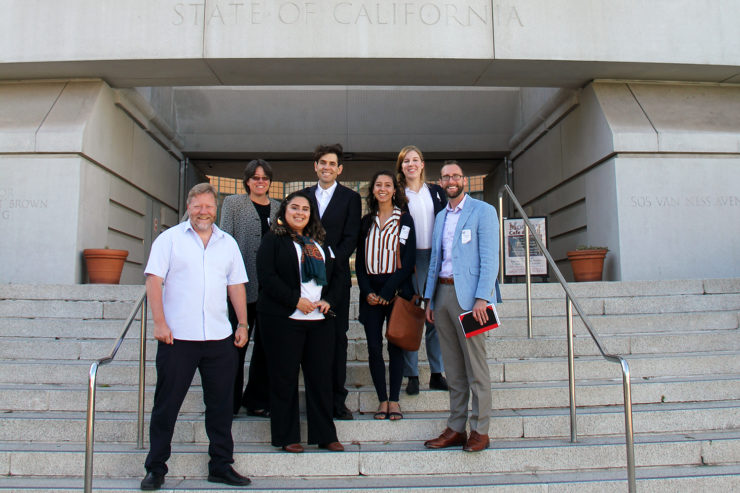 Arne Jacobson participated in a conference panel discussion about transmission, substation, and interarray challenges and solutions. He noted that substantial investments in transmission infrastructure would be needed to support development of a commercial-scale wind farm — comparing the existing transmission lines to a capillary where an aorta is required.

Mark Severy shared some early results from our offshore wind feasibility studies during the CEC workshop. Close inspection of wind speed data has revealed high variance over the course of a day, week, or season, and from year to year. The graph below charts potential generation for a 144 MW wind farm in the Northern California BOEM call area, based on wind speed data from three weeks: two in late June to early July 2008, and one from early July 2009.

This figure demonstrates that we will need a more granular understanding of wind speed than is provided by daily averages, in order to best integrate offshore wind into the California electrical grid. Our working estimates for this farm design are that full capacity power production would be generated 32% of the year, no power would be produced for 21% of the year, and that for 47% of the year, the farm would produce at partial capacity. Overall, this wind farm as modeled would produce 46% of its rated capacity annually, with higher production in the spring and summer.

The next steps of our modeling will investigate how different scale wind farms can integrate into the local electricity grid. We will study how offshore wind can operate in parallel with existing power plants and renewable energy resources and, through a partnership with PG&E, look at the costs and requirements to upgrade the transmission infrastructure.

Takeaways from our student researchers…

In addition to Schatz professional staff, three students participated in the OSW conference and CEC workshop…

Attending the PacRim Offshore Wind conference was an incredibly valuable experience. I gained quantifiable data to use in our project analyses, and also was able to learn a lot from observing how professionals are interacting with each other and how they are talking and thinking about the wind industry. In addition to gathering valuable information about the status of offshore wind technology and the market, there were good presentations and lots of information about current environmental science. And, I was able to talk to numerous experts who are willing to provide feedback on the economic models I am developing for the Schatz Center and for my thesis.

Julia Anderson is a graduate student in Energy Technology & Policy, who is working on the economic components of our offshore wind feasibility studies.

The Pacific Rim Offshore Wind conference and the CEC workshop really opened my eyes to how optimistic the offshore wind industry is and how great the resources off the coast of Northern California are. I got the opportunity to meet so many leaders, policymakers, and researchers in the industry who helped validate the work that I’ve been doing for the Schatz Center. It was most exciting to see our energy commissioners listening so intently and encouragingly to the research that we’ve been working on, especially because of the aggressive goals California has set to completely rely on clean energy sources by 2045. I’m inspired by the enthusiasm shown from the industry and grateful that this is such a favorable time for me to start my future career in renewable energies.

Tina Ortega is a senior in Environmental Resources Engineering. She has been working to model the energy generation from each wind farm scenario, and is analyzing key trends in the data to see how these generation patterns will match up with the grid.

The conference highlighted both the potential value of offshore wind to California as well as the many challenges involved in developing this resource. From a technological perspective, floating offshore wind seems near ready for large-scale deployment and could provide a great deal of value to the California renewable grid mix and the economy as a whole. However, determining how to accomplish large-scale development in a manner that is economical for California ratepayers and minimizes the impacts to the local environment and stakeholders remains a tricky problem to solve. As a student in my final year at HSU, my experience at this conference has left me feeling highly motivated to seek out professional opportunities to address these challenges!

Craig Mitchell is finishing a second bachelor’s, in Environmental Resources Engineering. He interned this summer with Aker Solutions in Oslo, Norway.