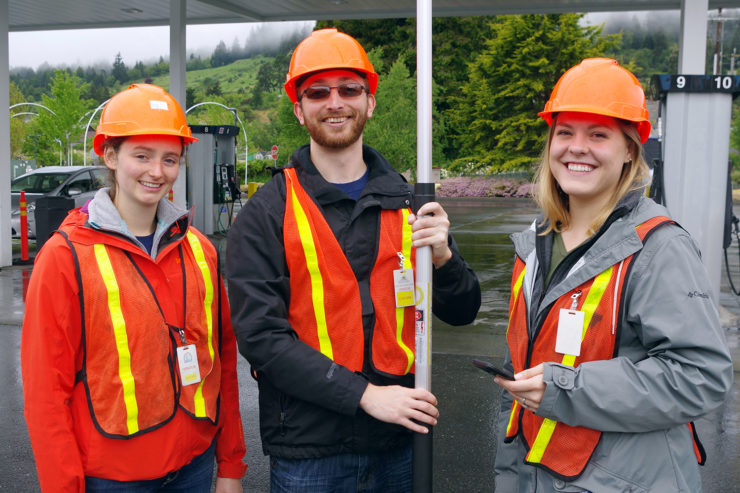 The future of energy

Wired magazine recently visited the Blue Lake Rancheria and the Schatz Center to learn how microgrid systems create energy security during natural disasters. Reporter Matt Simon compares the Rancheria’s microgrids to the evolution of personal computers — once novel assemblies that are now available out of the box.

Our Center’s microgrid programs focus simultaneously on immediate site needs and on system replicability. Our goal is to make these clean energy technologies feasible for wide deployment, saving our planet while also saving our communities. Two of our projects currently under development were specifically designed with replicability in mind: the Solar+ microgrid at the Blue Lake Rancheria and the Redwood Coast Airport Renewable Energy Microgrid.

The Blue Lake Rancheria and Solar+

The Blue Lake Rancheria is host to two microgrids, both partially funded through the California Energy Commission’s EPIC program. The main campus system went live in 2017 and provides energy security for the tribal government, hotel, casino, and site infrastructure including EV charging stations. A second, independent microgrid is now underway at the adjacent Rancheria gas station and convenience store, and will go live in the next few months. This smaller “Solar+” project is being developed as a test case for stores and fueling stations across California. The primary project goal is to design an affordable microgrid package for statewide deployment — allowing these sites to operate throughout regional energy blackouts.

This week, our Solar+ team will be visiting convenience stores and fueling stations across northern California. The team will assess existing electrical infrastructure, which will help us identify how Solar+ could be scaled to most effectively meet site-specific needs. For the tour, Schatz Graduate Fellow Thalia Quinn will be joined by René DeWees and Ellen Thompson. Ellen and René just completed a year on the Solar+ team as student researchers, while Thalia recently presented her master’s thesis on solar+ microgrid costs at gas station and convenience stores in California.

Resiliency needs are intimately tied to location. As Thalia explains, “Recent discussions with fueling station representatives have illuminated the importance of resilient systems during emergency events such as wildfires. These stations support first responder agencies and allow citizen evacuation during natural disasters, making them a prime location for the installation of Solar+.” Through interviews with industry specialists and by carefully documenting a variety of site layouts, we hope to build a flexible, best-fit system that addresses common needs.

From its remote location nearly 300 miles north of San Francisco, the Redwood Coast Airport (RCA) serves 136,000 residents in a county that spans 3,500 square miles. Located beside the runway is also the regional Coast Guard Air Station, which monitors and provides search and rescue for 250 miles of rugged coastline.

We are currently developing a solar+battery based microgrid for the airport and Coast Guard station that will ensure uninterrupted electrical service in the event of a natural disaster, precautionary de-energization of the grid, or other power outage. The solar arrays will have a capacity of more than 2 MW, and will be coupled with an 8 MWh battery storage system.

The airport microgrid is being funded by the California Energy Commission, with the explicit goal of creating a business case for microgrids. The system will be owned and maintained by the Redwood Coast Energy Authority (RCEA), on land leased from the airport. As the local community choice aggregator, RCEA is responsible for making power purchases on behalf of its customers (including the airport), while Pacific Gas & Electric (PG&E) provides the transmission and distribution system for that power.

The airport microgrid’s first objective is to provide onsite resiliency, so 2 MWh will always be retained in the battery storage. Additional generation will also be retained in storage until it is needed by the macrogrid — typically after nightfall, when the state’s solar arrays stop producing. At this point, RCEA will sell its excess energy generation via CAISO, California’s wholesale electricity market, allowing the state to make ideal use of distributed solar.

This airport system will be the first front-of-the-meter, multi-customer microgrid in PG&E’s service territory — and will be accessible from the PG&E distribution control center. We are currently working with the utility to develop an experimental microgrid tariff that will define the rules of interconnection and compensation for these enhanced resiliency systems. Development of the tariff and establishing a path for CAISO participation are critical steps for widespread microgrid deployment, from both a regulatory and a fiscal perspective.