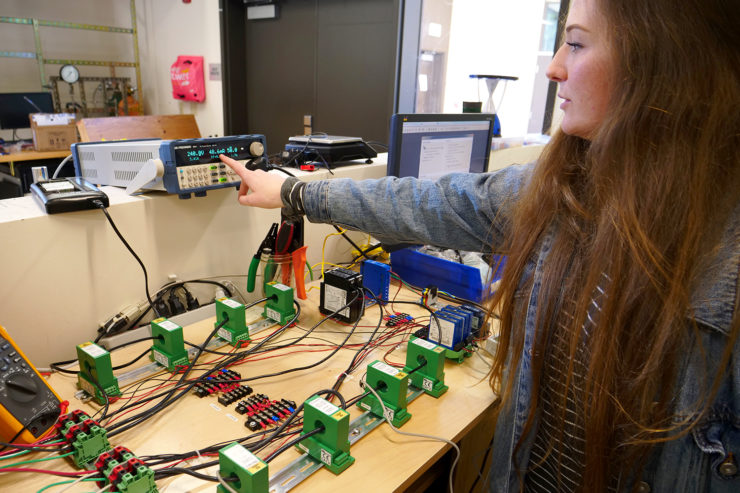 This month, five student researchers from the Schatz team were recognized by Humboldt State University and by the Environmental Resources Engineering (ERE) department for outstanding achievements. Chih-Wei Hsu and Ciara Emery received masters degrees this December; Sabrinna Rios Romero is graduating this month with a BS in ERE; and Liszet Burgueno and Elizabeth Van Skike are a junior and senior in ERE, respectively. We’re delighted that each of them is being recognized by the campus community, and wanted to share a little about their research here at the Center.

Chih-Wei Hsu graduated in December with a MS in Environmental Systems with a concentration in Energy Technology and Policy. His thesis revealed inequities by race and income in California’s deployment of public charging infrastructure and the cost of owning an electric vehicle. At the Schatz Center, Chih-Wei contributed to transportation projects including a Climate Resilient Electrified Transit Plan for the Humboldt Transit Authority. He also contributed to energy access projects, including analyses related to off-grid solar product adoption in Uganda and the environmental footprint of backup generators in areas with unreliable electric grids.

During his time at Humboldt, Chih-Wei was also deeply engaged in the campus and local community. He was a student director for HSU’s Sponsored Programs Foundation board, a member of the Humboldt Energy Independence Fund governing committee, an active volunteer with GRID Alternatives — and helped to install the Schatz Center’s solar array in 2018! Chih-Wei is now the EV Fellow at the International Council on Clean Transportation. This month, he was awarded the Patricia O. McConkey award as an Outstanding Graduate Student.

Ciara Emery graduated in December with an MA in Environment and Community. Her thesis contributed to the Center’s offshore wind feasibility research by interviewing local stakeholders to understand their perceptions of the challenges and potentials for wind farm development off Humboldt Bay. Ciara also attended conferences and workshops to evaluate the discussions being held within the community. Ciara presented her findings as part of the California State University research competition in April.

Ciara is now the Field Representative for Congressman Jared Huffman in Humboldt, Del Norte, and Trinity counties. This month, she was recognized by HSU for Outstanding Student Research.

Elizabeth Van Skike is a 2020 recipient for the Homer Arnold award for Applied Research in Environmental Resources Engineering. A key member of our solar products test lab team since 2018, Ellie has helped perform safety, durability, and performance testing on solar lighting products and appliances — including televisions, radios, and solar water pumps. She has designed and built electrical systems and components, including a data acquisition circuit for overprotection and solar charge product tests. And, she has trained fellow student researchers and new employees on product test protocols.

Elizabeth is continuing at the Schatz Center this summer, and will work on multiple projects related to quality assurance for off-grid solar products.

In 2018, Sabrinna Rios Romero furthered our understanding of biomass life cycles by quantifying the decay rates for the post-harvest residues of seven California crops. Measuring decay rates allows us to better assess how leaving agricultural residues in the field — versus converting them into electricity — impacts greenhouse gas emissions. Sabrinna also conducted a survey of state foresters to assess which post-logging residue pathways (e.g. piling, burning, and scattering) were most commonly used across California. And, she worked in the Center’s biomass lab to measure the performance of a gasifier system.

In addition to her Center research and engineering clubs activities, Sabrinna accomplished her ERE degree in only four years, an atypical achievement within this challenging major program!

Liszet Burgueno is a second year engineering student who has excelled academically while demonstrating ongoing commitment to bettering her community. She holds officer positions in both the Renewable Energy Student Union (RESU) and the Society of Hispanic Professional Engineers (SHPE), and also works for the Humboldt Energy Independence Fund, an organization that funds the implementation of green projects on campus. In 2019, as a student research assistant at the Schatz Center, Liszet contributed substantially to a literature review and experimental protocol development for measuring greenhouse gas emissions from stored woody biomass.

Liszet is the 2020 recipient of the Engineers Without Borders award. The EWB award honors a student’s contribution to ERE club projects, fundraisers, and community service, as well as professional-student interaction and social responsibility within and outside the ERE community.

We are very proud of our students and their work, and we congratulate Chih-Wei, Ciara, Elizabeth, Sabrinna, and Liszet for their accomplishments. ~ Arne Jacobson

Save the dates! Exploring the Feasibility of Offshore Wind Energy for the CA North Coast

July 29 @ noon – Thwaites Glacier Research: on board the NBP