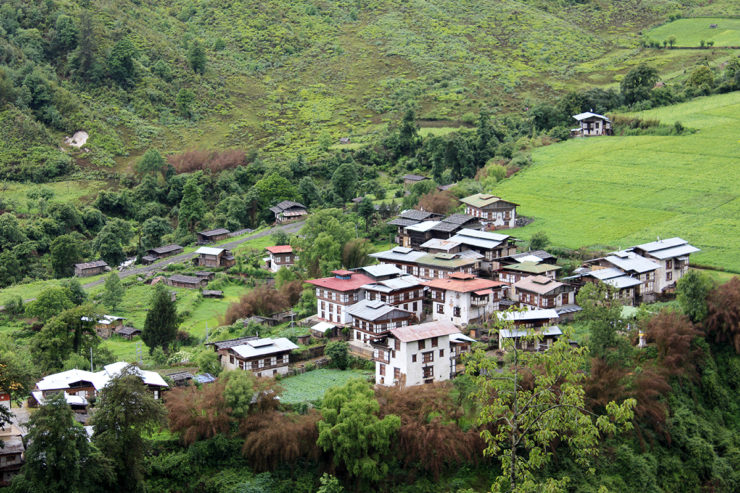 We’re excited to report on the successful installation of GridShares on a small microhydro mini-grid in Bhutan. In our Summer 2011 newsletter, we wrote about our upcoming fieldwork in the Bhutanese village of Rukubji, and we can now share our results and the feedback we’ve received from the village. The GridShare is a demand-side management device designed by our group of HSU students and advisors and is intended to reduce the occurrence of brownouts on power-limited mini-grids. The GridShare device encourages load-shifting in two ways: by using red and green LED lights to indicate the state of the grid to the user and by preventing residents from using large appliances, like rice cookers and water boilers, during brownouts.  After winning a grant to support the project through the EPA’s People, Prosperity and the Planet (P3) Student Design Contest in 2010, we improved upon our original prototype and tested the GridShare devices in a village-scale pilot installation in Rukubji, Bhutan.

Rukubji, a village of approximately 90 households connected to a 40 kW-rated microhydro system, suffered from daily brownouts and served as an excellent location to evaluate the potential of the GridShare technology to reduce brownouts in village scale renewable energy systems. To perform the pilot installation, our team, with the help of many volunteers, designed, tested and manufactured 120 GridShare devices here at SERC. In collaboration with the Bhutan Power Corporation and the Department of Energy of Bhutan, we installed 90 devices in Rukubji and the surrounding villages of Sangdo, Tsenpokto and Bumiloo in June of 2011.

We were thrilled when the community of Rukubji decided by consensus to keep the GridShares installed and the Bhutan Power Corporation agreed to continue to support the effort. Though several improvements to the design and implementation strategy would be useful before performing additional installations, this pilot project provides evidence that user-interactive demand-side management strategies, such as the GridShare, are effective at reducing brownouts on mini-grids.

SFSS webinar 3/25 — The Ecological Superblock / Neo Nature: the city in the Anthropocene

SFSS webinar 3/18 — Cántaro Azul: An organization’s journey to contribute to the human right to water and sanitation in rural Mexico